[Just joining us? See the first, second, and third posts in the series.]

Like most people going through heavy life experiences, I did not endure my recent trials alone. There were many people involved along the way, and I'd like to take a moment to recognize them, for both positive and... less-than-positive contributions. Actually, they were almost all positive in one way or another.

There were, of course, the other patients in the ward with me. Though I spent the entire first day not speaking to them at all, I eventually got to know them a bit better and learned that they were mostly good people, just going through some tough times, much like I was. D. was dealing with cancer and chemo treatments, and his daughter had recently cut him out of her life completely – changed her number and email address, moved away without a word, and made clear she didn’t want anything to do with him and his illness. JA. was enduring a seemingly endless string of neurological tests to deal with chronic migraines; despite the fact that he was pretty much constantly at a 7 or 8 level of pain, he was trying to keep a smile on his face and hope in his heart. B. was also going through neurological tests, though the reasons for hers were a bit less clear, and she was dealing with a lot of guilt for not being able to take care of her two girls, ages 5 and 10, well enough through the pain. JE. was struggling with an eating disorder and heavy depression, mostly from school and work stress and financial concerns. And my roommate A. was dealing with an alcohol addiction (which helped get her the DUI that sent her to the hospital in the first place), a heavily-strained relationship with her fiancé, an abusive relationship with her mother, and a major case of depression.

We were all a little lost and confused, just trying to find a way to get through the pain – mental, physical, and/or emotional. Once I opened up to it, I realized that this was a community in which I could find some support. While I may still have worried about being judged (enough to tell only bits and pieces of my struggles), I worried about it a lot less. I was pretty sure that if anyone would understand what I was feeling, these people would. I mean, I was never one of those people who didn’t believe depression existed – I knew it was real and difficult. But experiencing it firsthand is something totally different, and these people could understand that. We helped each other through the hard times, and we cheered each other through our baby steps forward, each of which felt like a huge triumph. I’ll still be thinking of many of those people for many weeks into the future, sending them good thoughts and hoping they’re doing well wherever they are. However I had to find them, I’m glad I did.

In addition to all the patients, I also had the doctors and nurses to talk to during my stay in the hospital. My two doctors were pretty cool, especially my attending M.D. They were pretty easy to talk to, and supportive of my situation. K., one of my occupational therapists, was also a really good person to talk to, and she introduced me to a great kind of therapy that I’ll be starting in January. And E., my social worker, was very cool and possibly the first person to whom I really opened up.

My nurses were… well, hit or miss. Nurses were on a weird schedule, so they were constantly changing around on us. There was one nurse I LOVED – S. – and she and I had multiple long talks together. She really listened to my situation, and understood immediately why it was so hard. As things happened to help me get better, she was so sincerely enthusiastic in her happiness for me, and she told me all the time how proud she was of me and the progress I was making. I loved chatting with her, and when I said goodbye, I gave her a big hug.

Many of my other nurses were generally pretty forgettable. But two of them were memorable for less happy reasons than S. B. was bossy and rude. She started out her shift with me by waking me up at 7:30 in the morning to take my vitals; she was the only nurse to WAKE ME UP to do this – everyone else seemed to agree that waiting until after I’d woken up and eaten breakfast was just fine. But no, she had to do it before I was up. And then, right when I’d gotten back to sleep around 8:00, she came back and woke me up AGAIN to give me my meds, which also usually was done after breakfast. And then she wondered why I wasn’t so keen on opening up to talk to her later that day when she came to “touch base” with me on how I was feeling.

But E. was the funniest. Mostly he was pretty mousy and kept to himself, which is just fine by me. But the best part was that he was my nurse on two different nights, which meant he was in charge of my “bedtime meds.” Now, for many people on the floor, there are sleeping meds of some sort, so a “bedtime med” is pretty much what you’d expect. Well, the first day they put me on my prescription anti-depressant, they hadn’t told me whether it was just once a day or not. So even though I’d taken it in the morning, when E. came to ask when I wanted my “bedtime meds,” I thought maybe he meant my anti-depressant. When I said that, however, he said, with obvious discomfort, “No, your, um, you know, your, um… [whispering] contraceptive.” Oooooh – he meant my birth control pill (which I take for cramps, not that I really have to justify that to anyone). Suddenly I was very confused about why a nurse would be so uncomfortable talking about birth control. I mean, doesn’t he have to deal with way more embarrassing stuff than that? But sure enough, the next time he was my nurse, he again came to me, asking, “So when do you want to take your, um, uh, your…” This time I helped him out by interrupting and saying I was ready whenever he wanted to bring it to me. But seriously, do you agree that a nurse ought to be able to talk about birth control pills without so much embarrassment? The answer is yes, you do. Thanks.

But of course the patients and staff were not the only ones I was seeing during my time in the hospital. I also had my wonderful friends, coming to see me and support me. First and foremost, there was J. J., who brought me to the hospital after I did something incredibly stupid, and who never once pointed out to me how stupid I was (because he knew I knew). J., who came to see me for at least a little bit every day I was in the hospital, and who called me every day, too. J., who helped me out by emailing people for me and being the information hub while I was out of commission. J., who planned a “welcome home” gathering for the night I got back, just so I wouldn’t be too lonely. I couldn’t have asked for a more supportive friend to stand by my side through this whole ordeal, and I am very grateful for that support, undeserving though I was of it. Thank you, J.

My mom and Seeser, far away though they were, were also very helpful. I talked to them both on the phone a lot. I felt bad when I first told my mom, knowing she would feel guilty and blame herself as she is wont to do in these situations, but I knew she would want to know what was going on. My sister grabbed hold of the opportunity to get back at me for a comment I made many years ago, when she had spent a little time in the hospital as well. I remarked at one point about her time spent “shackled to the wall, mumbling to herself.” When she called me, she asked how I was doing – “Shackled to the wall? Mumbling to yourself?” I think she spent hours just gleefully anticipating being able to say that to me. Like I said in the last post - warped sense of humor. It’s how we deal.

There was also Tpiggy, who probably hates that name. ;) 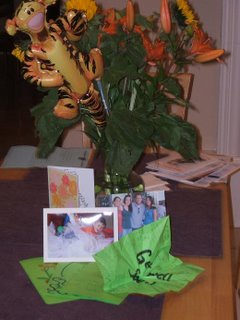 [Picture above: Flowers from J. and another friend, also J.; cards from English colleagues, OP and Miss Ish, my students, and Lady M; and, of course, Tigger.]

And it didn’t end when I left the hospital, because, as I mentioned, J. planned a sort of “open house” for the night I got home. 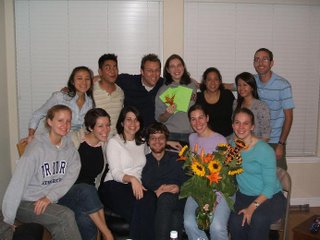 Mostly, it was a big, happy gathering of the English cohort, which was great. We’d been trying to have a get-together for a while, but everyone was always too busy – I said if I’d known this was all it took, I would have gotten sick a while ago. I was deeply touched by the fact that they all took time from their busy lives to come see me, but what really got to me was what one of them brought. She came in with cards from my students at school – one card from each period. I had to work hard not to just burst out crying with how touched I was. And they wrote such cute messages to me – I really felt like they missed me and wanted me to come back, and that was really great to feel. I shared some of the more amusing messages with the other English folks, and we had a good laugh about that. Then we played a couple rounds of Taboo, which elicited the now-infamous “Squat and…” “THRUST!” Then they gave me a card also, and a Starbucks gift card (they know me so well). It was a wonderful time.

And now, posting these recaps, I have another thank you to add to the list. I have to thank you - all of you reading and commenting and lending support from your various corners of the world. I have talked to many people about the warmth and generosity to be found in the blogging community of which I have made myself a part, and I have not been disappointed in the last few days. Your words, both in comments and in emails, have meant so much more to me than I could possibly say.

So thank you to everyone who supported me through this – fellow patients, doctors, nurses, therapists, social workers, and, of course, my friends and family. Many of you will never read this, but that’s okay. I’ll just send this out into the void and hope that good things come to you for all the good you did for me. I might not be here if not for you all, so thank you, from the bottom of my heart.

In the next post: How the psych unit really can seem like a prison at times.
Posted by Lara at 11:06 PM

Of course, it took me until now to realize that I forgot to return Mil's book to you. Remember when I threatened to be a book thief, and cackled maniacally? Now you know...

You are always in my prayers, babe. Stay strong. I'm proud of you.