Sorry for the radio silence, loyal readers. As I mentioned, I’ve been pretty horribly ill this week. I’m feeling much better now – I think yesterday afternoon was the turning point, when I was finally able to eat more than two bites at a time and keep it down. And it looks like making up the work I missed won’t be too bad, as long as I put in the time this weekend to get all caught up (and maybe even get ahead? Let’s not go crazy here…). Thanks much for all the well-wishes and good thoughts. You like me – you really like me! 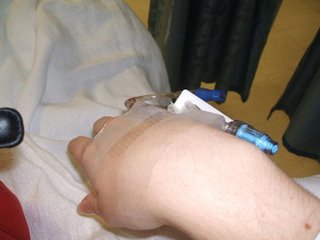 Gratuitous picture of my hand and the uber-painful IV I had to have. Just in case you doubted that I was ill.

On a related note, my students were also sending me good thoughts this week. They were effusive in expressing their excitement at my return, repeatedly telling me how much they had missed me. It was nice to know that my students seem to like me as much as I like them – they’re so cool. Talking to my CT (cooperating teacher, the teacher with whom I work at my placement school), I learned that they had been telling her of their concern for me during my absence. She said, “They really like you. They think you’re funny.” That’s awesome, as I like having the fun rapport I have with them now, and I like being able to joke around with them. But the best part was this: “They really like your shoes. They were telling me, ‘Miss David has cool shoes!’” This is a huge compliment, especially given their history teacher has held the reputation for Best Shoes on Campus for a while now. But I gotta say, after a hellacious week of bad health, it warmed my heart to know my kids missed me, and they think I’m funny and have cool shoes. 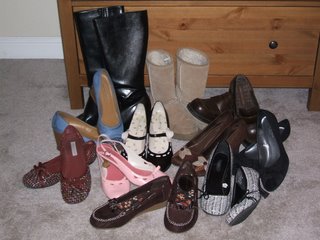 As long as we’re talking about my cool shoes anyway (they are pretty cool, no?), I figured I’d include a visual. This is just a picture of some of the more photogenic pairs of shoes – in fact, there are 19 pairs not pictured, eight of which are flip-flops. And don’t even get me started on dance shoes, of which I have nine pairs. And somehow, I never seem to have enough…

On a seemingly unrelated - but actually related - note, some of you who have been long-time readers may remember the day I had to say goodbye to Starbucks. Well, not all Starbucks – that would be hell on earth for someone like me. But my Starbucks, the Starbucks where they knew my name AND my order, because, well, my order never changed. Oh, sure, I knew there would be other Starbucks (is that the plural form? Starbucks’? Starbuckses?) in my future, but they would never be as good – they would never greet me with, “Hi Lara - iced venti chai?” Since that day, there have been a few Starbucks to come into my life, but they’ve all been pretty infrequent and random – never anything serious. But the Starbucks at the train station, well, that Starbucks I’ve seen darn close to every morning since I’ve been at my high school. There are two problems, though, that stand in the way of this Starbucks becoming mine: my order is constantly changing, and they don’t take names. My order changes every day, depending on how much caffeine I think I’ll need (did I get two hours of sleep or seven?), how my taste buds are feeling (adventurous? timid? suspicious?), and how empty or full my stomach already is (do I need to crunch a triple shot into a small package, or can I leisurely sip through 24 ounces to get my fix?). So these workers, while seeing me every day, can’t really learn a “regular” order for me. I’m even unpredictable as to whether I get food or not, as I sometimes abstain from the heavier stuff, and sometimes give in to the siren song of petite vanilla scones or a sausage breakfast sandwich (but never the two together – blech). Add to this the fact that they never take names for orders – they just shout out the order: “Iced venti vanilla latte!” – and I’m destined to never get a friendly, “Hi Lara – iced venti chai?” from these people.

But a couple weeks ago, I walked in and was greeted from three different places with shouts of, “Miss David!” About ten of my students were there, getting a pre-class caffeine jolt and hanging out, and they all had big grins on their faces as they said hi to me. I said hi, chatted a bit, got my drink, then headed out, telling them I would see them later in the day. As I left, the thought occurred to me that having a random Starbucks employee greet me by name and drink order is nice, but having my students greet me by name with a smile is much, much nicer.

I don’t think I’ll be missing that other Starbucks anymore.
Posted by Lara at 7:21 PM

I love hearing (reading?) "Miss Doyle." It sounds so charming!

I don't recall when you had to say goodbye to Starbucks, either... but.... PRETTY SHOES.

In all, I'm liking the pretty shoes. Bet you couldn't tell, huh?

M - hearing it is still a little weird for me sometimes, but i'm getting used to it. now i really only have problems when i hear it from about five directions all at once because everyone needs me to help them RIGHT THIS VERY SECOND. :-P

mocha - awww, thanks. i'm touched you like them, what with your being such a fashion icon and all. remember when you talked about your "soul sandals"? i have a similar story that i think may become a post soon...

fourthbreakfast - i am feeling much better, thank you!

This post makes me so, so happy (minus the sick part). Shoes (very cute ones, by the way...love the round toes), Starbucks...and STUDENTS!

They don't take names?!? I'm pretty sure that Starbucks policy is to always take names at every store.

But it's nice that your students were there to greet you!