A Request and Some Smiles

Has anyone else noticed traffic around here increasing as the drama has begun to build up? I always used to say that people crave drama – that’s why I had so many people fascinated by my journal freshman year. Once my life settled down into a calm, pleasant routine, everyone got bored. But bring on the depression and boy howdy! Suddenly everyone wants to know the haps.

Along with the increased readership has been an increase in the number of anonymous commenters. Now, I have no problem with people commenting anonymously – if I did, I would check the “Don’t allow anonymous comments” box on my blog’s settings. However, with multiple people all commenting anonymously, it’s getting a bit confusing. So I’d like to make a request: If you’d like to publish a comment anonymously, consider giving yourself a pseudonym, just so I can distinguish one anonymous commenter from another. You can even identify yourself by a series of numbers if you like, just so long as I can keep you all straight in my own mind. If you’d rather not, however, it is perfectly fine to continue using the anonymous title. This should not, in any way, prevent anyone from commenting, so please keep those comments coming! You know me and my whorish stand towards comments, so don’t let me down.

With that out of the way, a few things that made me smile today:

2) Penguins. Just because penguins are so cool. Happy Feet, anyone? 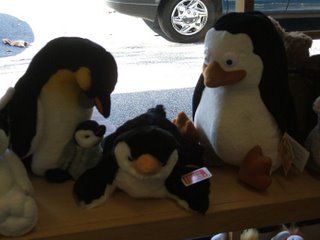 3) Shopping with Tali. Neither of us bought anything (except dinner – yummy fried clams), but just wandering the mall and looking around was fun. We discovered that black, white, and red are apparently the “in” colors right now, though some stores apparently missed the memo on that. We also discovered that a lot of stores sell lingerie disguised as regular women’s clothing. They can claim it’s a dress all they want, but I’m certain it’s underwear.

4) My new coat, which, as it turns out, perfectly matches my tweed ballet flats. Come on, look at that and tell me it’s not meant to be. 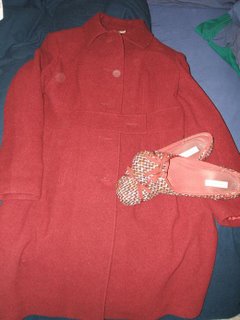 5) Wearing said new coat and tweed flats to the English cohort cuddling- er, I mean, dinner. Even though there were only eight of us able to make it, we had a grand time. I actually laughed so hard that my stomach started to hurt. And here I thought I’d permanently lost my laugh. Turns out it was just hiding. It came back when we discovered that (some) friends are like hot chocolate, but others (read: me) are like earthy dirt coffee. Oh, and when Streetmate laughed like a donkey and I told her she was gonna get lucky in the backseat of her Mustang when we left (‘cause I was her date, and nothing’s sexier than a girl who laughs like a donkey). Good times.

That said, I still spend a huge portion of each day wishing I could just go to sleep and wake up in a new life. Progress is slow, but I’m doing what I can.

Labels: Mix It Up

Those laughs felt really good. I loved your coat, and now that I can see what shoes you were wearing (why didn't you just plop your foot on the table?!) I agree that they match your coat fabulously. I look forward to seeing you on Tuesday, and I'll try to give you a hug that rivals one from OP!

I'm glad you got to see your mom, and that your finding some smiles. -TB

miss ish - yeah, the laughs were good. i'm glad you liked the coat (and shoes, now that you've seen them). thanks for the hug today - it did indeed rival those from OP.

TB - i love that you continue to misuse "your" and "you're." it's a very endearing quality, and brought me yet another smile. :)

Gosh, I thought I usually caught those things. :-P But heck, more smiles are good.

anon - i confess to having no idea to what "things" you are referring in saying you "usually caught" them. what things?

Darn. Again. I was the anon post above, and forgot to sign. The things I usually catch, or thought I did, are misused words. And stupid errors. Looks like my mind is out as well. -TB

TB - ah, that makes much more sense now; thanks for clarifying. and, um, you don't usually catch them. i just don't usually point them out. :-P you may now feel free to despise me for my grammatical snobbishness.

maybe your mind and mine are in cahoots in deserting us? i hear mrs. chicky's attention span has also gone AWOL. maybe there's a big party somewhere about which we all know nothing. keep me posted.

Regarding the poorly veiled (ha) lingerie in (3), it appears sad but true. My friend might call such an item a gownless evening strap.