I’ve discovered, over the years, that there are some conversation topics that are just guaranteed to inspire enthusiastic participation. Sure, sometimes it depends on the people involved and the context of the situation. Politics, for example, has often been known to provoke intense discussion, but it’s also – at least as often – been known to provoke awkward silences. But some topics will always get an active response, like, say, Oreos, for example. Today, I turn to another of those topics: Favorite Childhood Toys.

Every so often, someone will say something that prompts an easy one-liner that leads directly to “Did you play with _________ when you were younger?” From there, the conversation is 100% guaranteed to last for at least twenty minutes and move through at least four increasing levels of volume as the excitement rises. You’ve all been there, right? Standing around a coworker’s cubicle, talking about that presentation Jim just gave, when someone comments on how foolish Jim looked for not knowing what he was talking about, and two different people say, “’Cause knowing is half the battle,” and everyone starts reliving their G.I. Joe glory days. I, for one, did not play with G.I. Joe, but I did play with these gems: 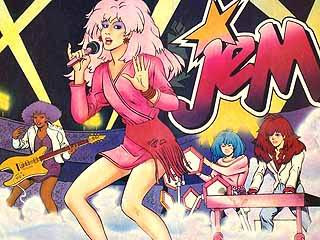 1) Jem! Yeah, since I said ‘gems’ anyway, I might as well start with the one-and-only true gem of toys. Jem and the Holograms were fantastically awesome, by which I mean strange and confusing. Jem was a businesswoman by day, rock star by night, and changed between the two by touching her magical (and VERY gaudy) triangular earring. There was some lady in a computer, too, who did something important to the plot of the stories, but she was no fun, so we mostly ignored her. Ah, the concerts I gave with my Jem and the Holograms dolls (audience filled mostly with stuffed animals), and the fabulous after-parties where much was probably going on that I had no right to understand at that age. Good times. 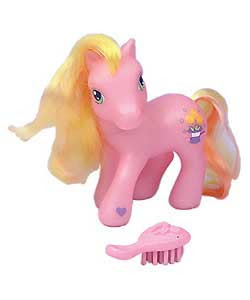 2) Every little girl will, at some point, go to her parents and, with the tirelessly-perfected pout, say, “I want a pony!” Well, weary parents could breathe a sigh of relief because of My Little Pony. I’m not sure why we were so easily convinced that these tiny plastic quadrupeds were just as good as the real thing (they certainly smelled better, I’ll grant you that), but we were, and My Little Pony won a place in many a young girl’s heart. My most cherished My Little Pony memory is of the hours playing with the big pink castle that opened up and had three distinct towers. Now, how exactly the horses got themselves a castle, I’ll never understand. But, boy howdy – I loved me some My Little Pony.

3) No child of the ‘80’s could possibly escape a discussion of childhood toys without mentioning Cabbage Patch Kids. My poor mother had to endure the screaming hordes at the mall during the holiday season just to get me and my sister our Cabbage Patch Kids. And, of course, the dolls themselves weren’t enough. They needed clothes, and shoes, and a carriage, and a playpen – I can still remember the Christmas morning I came out to find that Santa had left us a Cabbage Patch Kids playpen. And if I close my eyes and think real hard, I can still conjure up the smell of the preemies’ heads, that wonderful mix of baby powder and plastic. Yummy…

I could go on for hours, just thinking of one after another – She-Ra, My Buddy and Kid Sister, Barbie dolls (of course), colorforms, Care Bears, Candyland, Lite Brite, Popples… the list goes on and on. But eventually, I need to cut myself off here. So I will end with a toy that, while perhaps not the most popular toy of its time, holds a special place in my heart as one of my all-time favorites:

4) Skip-It. “And the very best thing of all – there’s a counter on this ball. So see if you can beat your very best score; see if you can jump a whole lot more!” Oh man, I’ll be singing that song all night. Skip-It was this phenomenal idea, the brainchild, no doubt, of an exhausted parent at the end of his or her rope. “Maybe,” said parent, “if I can get the kid to just stand in place and jump over and over again for hours at a time, she’ll be too tired to get on my nerves anymore!” The basic premise of Skip-It is that you put your ankle through this ring, and attached to the ring by a long stick is a plastic ball – think of it as a plastic version of “the old ball n’ chain” image from old prison movies. You start the ball spinning around in its wide circle, but of course it’s going to run into your other leg, so what do you do? You switch weight quickly to hop your foot over the ball as it comes around, switching back so as not to lose the momentum. And the “counter on this ball” counts once every revolution (though only up to 999, much to the dismay of many an obsessive and bored child), so you can keep track of your scores. I spent hours at a time with my Skip-It, just standing at the bottom of my driveway, muttering to myself about my sloppy technique and how I would NEVER be a world champion at this rate.

So, now that you know some of my favorites, what were your favorite childhood toys?
Posted by Lara at 10:01 PM

Star Wars Action Figures. Totally. I still have a whole bunch of 'em. Lego, particularly the space scenario stuff. And Transformers (More Than Meets The Eye). And sadly, I was that geeky kid who played with Rubik's Cubes and yo-yos...

I'm ashamed to say I had kind of a thing for Hello Kitty.

Ha! I was just talking about this on Saturday. The topic of conversation: He-Man and Transformers. I had a bunch of He-Man stuff, including Castle Grayskull, Skeletor, and some green slime that I had to play with over a sheet that protected the living room carpet. Transformers were great, too (remember the rival toy, GoBots?). The one toy set that I always wanted, but never had, was the Matchbox stuff.

I wonder how many girls out there played with Barbie, Strawberry Shortcake, He-Man, & Transformers?

My mom was definitely not into the Barbie thing so my sister and I never had them. But I didn't much notice the loss...I remember at a friends house using her barbies as projectiles to throw from her upper bunk onto the forts we'd made out of blocks below. Precocious gender-norm-challengers we were (I suppose..)

mazurka - you and seeser have the transformers in common, though neither of us was really into star wars. in fact, i'm pretty sure neither of us saw star wars at all until we were in high school. people who can do rubik's cubes are smart, so good job with that. and yo-yos, huh? you must be very good with your hands - i was a hopeless failure with a yo-yo. :-P

jenny - ha! yes! and yeah, i had the hello kitty, keropi, etc. obsession for a while, too. oh, man, the memories that are currently flooding back. do you remember tuxedo sam? he was my all-time favorite. but then, i have a thing for penguins in general. :)

seeser - see above what i said about you and mazurka sharing the love of transformers. i do remember your he-man stuff, especially the green slime. that stuff was totally gross. why couldn't you be a normal girl like me and disdain all messy things?

tali - no barbies? that's cruel and unusual. barbies were, for me, really just about getting them dressed up in cool outfits. i never "played" with them in any real sense - never had little storylines acted out or anything. i would just get them all dressed in cool clothes for some event, then change all their clothes for some other event. maybe this is where my shopping obsession comes from...

Hi. I'm not a blogger but I really enjoyed reading your stuff. I was looking around for some old Jen and the Hologram pics and up popped your blog. Thanks for the trip down memeory lane. My Little Pony, Cabbage Patch, everything! I'm going to call my brother and ask about his Transformers and Castle Gray Skull.
I loved the smell of that thing!
Looks like you did pretty well for yourself. I hope you have a happy life.
I enjoy watching Fosters' Home For Imaginary Children these days with my kids.

I like your discussion and i agree too that polics is really one topic on which everybody is ready to comment but ya people should also make their mind to make themself ready to discuss even on the topic which are noe related to politics.