Is It Monday Yet?

Ah, Fall, that glorious season that brings a refreshing nip to the air and dazzling colors to the foliage - when the ground is covered in a beautiful tapestry of orange and red and yellow, and the wind carries with it just a hint of snowfalls to come. ... Wait, I forgot, I live in , which means those things are just myths to me – tall tales told by crazy East-Coasters who are just jealous of our unending sunshine. But there is something wonderful about the arrival of Fall - something magical in the air, something exciting and wondrous, something I can’t quite put into words.

No, wait, I can put it into words – it’s football.

Yes, the end of summer brings with it the beginning of football season, and none too soon, I say. It’s funny to me that I became such a football fan, because when I was growing up, I really didn 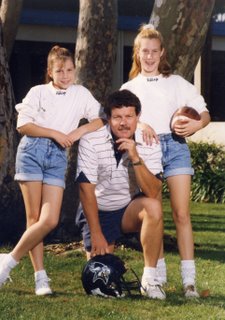 ’t like it. To be honest, I hated it. I resented it the way I would have resented another woman if my father had taken it into his head to mess around on my mother. Because in a way, football was that other woman; football got the time and attention my mother, my sister and I all would have liked to get. We went to the games every week because it was important to him, and because, at times, it seemed like the only way to see him at all. When we were old enough, we became the water girls for the high school team (see picture, circa 1992), so that we could be on the sidelines with him during the games. By the time I was a student at that high school, he wasn’t actually coaching anymore, but we still went to every game, still stood on the sidelines. In the later years, games were a social event, and I would go every week to sit in the stands with my friends and gossip. But I definitely went to all those games, because, well, not going didn’t really seem like an option.

When I got to college, I turned my back on football completely. I was out from under the tyrannical rule of the pigskin, and I was stretching my newfound wings of freedom. In my four years at Stanford, I never went to a single football game, nor do I think I ever even watched one on TV. I missed the Super Bowl parties, but I really just missed playing Pass-the-Football and hanging out with family and friends. Football itself was out of my life, and good riddance.

By the time I graduated, I was beginning to really miss it. It was such a huge part of my life for so many years – it just seemed wrong to live a life completely devoid of football. I struggled for the first post-grad year, trying to ignore the game’s siren song, idly keeping an ear out for what was happening in the NFL. By last year, I’d come to accept my fate, and I began to watch the games whenever I could – I became a football fan.

And Fiance became a football widow.

Our gender roles became a bit non-traditional. On one memorable Sunday – January 15, in fact – I was watching the Steelers-Colts game. With about four minutes left, Fiance decides we have to go to Macy’s, because they’re having a sale and he wants to buy new clothes.

No dice – it was time to shop. So we get in the car, whereupon I immediately turn on the radio and find the game. Crap, Bettis fumbled! On the 2-yard-line! What the f- ? Colts are going for a game-tying field goal and… We’re at the mall and the car is turned off.

Sorry, I had a minor fit there, but my, doesn’t Macy’s have some nice things? Sure, whatever. Yes, dear, you go try those shirts on, I’ll wait here. …

*Lara sifts wildly through her purse until she finds her cell phone. With trembling hands she frantically texts her (still on friendly terms) Ex to ask, “Who won the Steelers-Colts game?”*

*Hiding the phone behind her back* “Very nice, dear. It looks great on you.”

*Lara stares at the screen of her cell, willing the Ex to respond quickly. It chimes! A message received! She reads, “Steelers! :)” and breathes a deep sigh of relief. Then she stashes her phone again, in the hopes Fiance won’t realize the extent of her addiction.*

Fiance got his clothes and was content, but damn! I would have liked to see that game. You can see, though, that this is a bit non-traditional. If you heard about an engaged couple wherein one person wanted to go shopping and the other wanted to watch a football game, wouldn't you guess the first would be the female and the second the male? Well, things are different around here.

Of course, the other reason I crave football season, besides the games themselves, is Monday Night Football. Now, you’re thinking to yourself, “But Monday Night Football is a game, so you’re still looking forward to the games.” You misunderstand. MNF is great because it’s a game, but in that way it’s really no different than any of the Sunday games. But MNF is different. It's special. It's better. And it is made so by one thing and one thing only.

I LOVE the MNF theme song. Like, to the extent that I have the mp3 of it and listen to it whenever I’m sad just to get me pumped up again. I think it’s possibly my favorite song of all time. Am I huge dork? Yes, obviously. But I’m okay with that, as long as the MNF theme song is around – it’s worth the strange looks I get from people who don’t understand.

I'm not the only one who does this, right? Other people like TV theme songs, too. What's *your* favorite theme song?
Posted by Lara at 10:45 PM